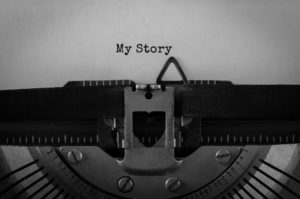 I was an unexpected pregnancy.

I wasn’t given a name. I was placed for adoption as a Jane Doe. My first foster family called me Virginia. A few months later, my adoptive family named me Jaime, and so I’ve been ever since. Being the product of an unexpected pregnancy challenged me considerably as a youngster. I had all of the usual adopted-kid unanswerable questions. “These people are nice, but why didn’t my real parents want me?” “Did they take one look at me and know I was already fatally flawed and therefore unlovable?” “Why do these people find me worthy of their love?” “Do I really belong here?” “Are my biological parents even looking for me?”

With lots of time, wonderfully supportive parents, and some serious introspection, I was able to grasp the nature of ‘my story’ and understand that life is not as black and white as a child often believes it to be. Everyone did what was best for me, and I was raised in the family I was meant to be raised in. (I did eventually track down my biological family, but that’s a story for another time).

I married my husband in 2011 on a tiny little marina on Amelia Island in Florida. There was no fanfare as he was in the Navy, and we were marrying before he deployed, so he knew he’d have roots here in the States. See, we had planned to host a larger wedding, but my then-fiancée wasn’t able to get the time off of work, so we had to improvise. The elopement covered the legal means. The party we could throw later. After three more attempts to schedule a wedding, it all finally came together in 2012, but the Navy only gave my husband time off because my dad was dying of terminal cancer.

Before I go too much farther into the bittersweet tale, let me flesh out a few details.

At the age of 19, I was diagnosed with PCOS (polycystic ovarian syndrome). As time went by, things progressed to include endometriosis and fibroids. By the time I was 26, I had one ovary removed because it had become more tumor and cyst than a functional organ. With all of those biological factors against me, I knew that my odds of getting pregnant and having a child through the usual route was rare. (Not to mention it was an oddly foreign concept to me anyway since I had grown up in a family built by adoption rather than one built by biology). So my Plan A for family building from day one was “adoption.”

I know how rare that stance is. Most people exhaust every biological and medical means at their disposal before saying, “I want to adopt to grow my family,” but I’ve always wanted to grow my family through adoption. Now, my husband was raised in a different dynamic. My husband has a large family (three sisters and a brother) who are all biologically from the same parents. You can see the resemblance in family photos, something I never really even thought about as a kid. My parents weren’t my parents because of conception or commonalities. They were my parents because they were the people that committed to me, who loved and stood by me no matter what from the first time they brought me home at 10 months old.

So, needless to say, we butted heads a bit about how far we were willing to take things medically before going the adoption route. I didn’t see the point in spending money on ‘maybe babies’ when we could pursue adoption and get a definite result.

We ended up meeting in the middle. I got off of the hormones I’d been on forever, and—if we didn’t get pregnant in three years—we’d adopt. And we’d adopt older. I can deal with a lot of things, but if we could skip the toilet training/up all night every night phase, I was all about it.

The years passed without a single blip of a baby on the horizon. We started the adoption process. It would take about another three years to be approved for foster care and to decide on aiming for a sibling group, 4-9 years old.

The room was set up for the kids. We’d done a cute little “waiting for you” photo shoot. We were even on the waiting list for a couple kids. But all of them fell through for us…and all while my husband was on deployment. And on top of it, our dog had started to poop in the kid’s room for some weird reason. I took it as a sign and screwed the door shut as if to keep the heartbreak locked away in there. I mourned what felt as though it just wasn’t for us. Here I was, 35 and infertile, and seemingly unable to seal the deal on adoption either.

Then, a few months later, I felt funny. More ‘funny’ than my usually unusual periods made me feel. Since the feeling stuck around, I took a test. My first words upon seeing the positive sign aren’t suitable for this article. But I knew my chances of miscarriage were high. A few weeks passed and the positive signs all stuck around. I couldn’t wrap my head around it. I panicked. I was never SUPPOSED to have a newborn! And a biological kid?! I had JUST found my career as an Olympic weightlifter and a coach. What the heck was I going to do now? My husband was over the moon but wise enough to temper his enthusiasm until I showed some signs of excitement. All I felt for the first trimester was a quiet impending sense of dread.

The pregnancy was healthy. In fact, with my doctor’s blessing, I continued in my sport all the way through my pregnancy and qualified for a national meet while pregnant. I didn’t go to the meet though; I had my daughter 2 weeks beforehand.

That sense of dread turned into a deep seeded sense of responsibility. I now had to keep this little person alive and thriving. But I couldn’t work, so the money wasn’t flowing in (self-employed), and I had enough funds to take two weeks off work before it would severely impact our finances. And it did. Those first two years were very lean. Barely keeping a roof over our heads, we managed. And in those lean years, we found resourcefulness, each other, and a bond that feels familiar—not because it’s made of blood, and not because my daughter looks like me (she doesn’t; she resembles her father nearly completely). Our bond was we choose to be a family, no matter what. My life is one big, unexpected circumstance, from birth to even now. But that doesn’t mean it’s not exactly as it’s supposed to be.

This website uses cookies to improve your experience while you navigate through the website. Out of these cookies, the cookies that are categorized as necessary are stored on your browser as they are essential for the working of basic functionalities of the website. We also use third-party cookies that help us analyze and understand how you use this website. These cookies will be stored in your browser only with your consent. You also have the option to opt-out of these cookies. But opting out of some of these cookies may have an effect on your browsing experience.
Necessary Always Enabled
Necessary cookies are absolutely essential for the website to function properly. This category only includes cookies that ensures basic functionalities and security features of the website. These cookies do not store any personal information.
Non-necessary
Any cookies that may not be particularly necessary for the website to function and is used specifically to collect user personal data via analytics, ads, other embedded contents are termed as non-necessary cookies. It is mandatory to procure user consent prior to running these cookies on your website.
SAVE & ACCEPT